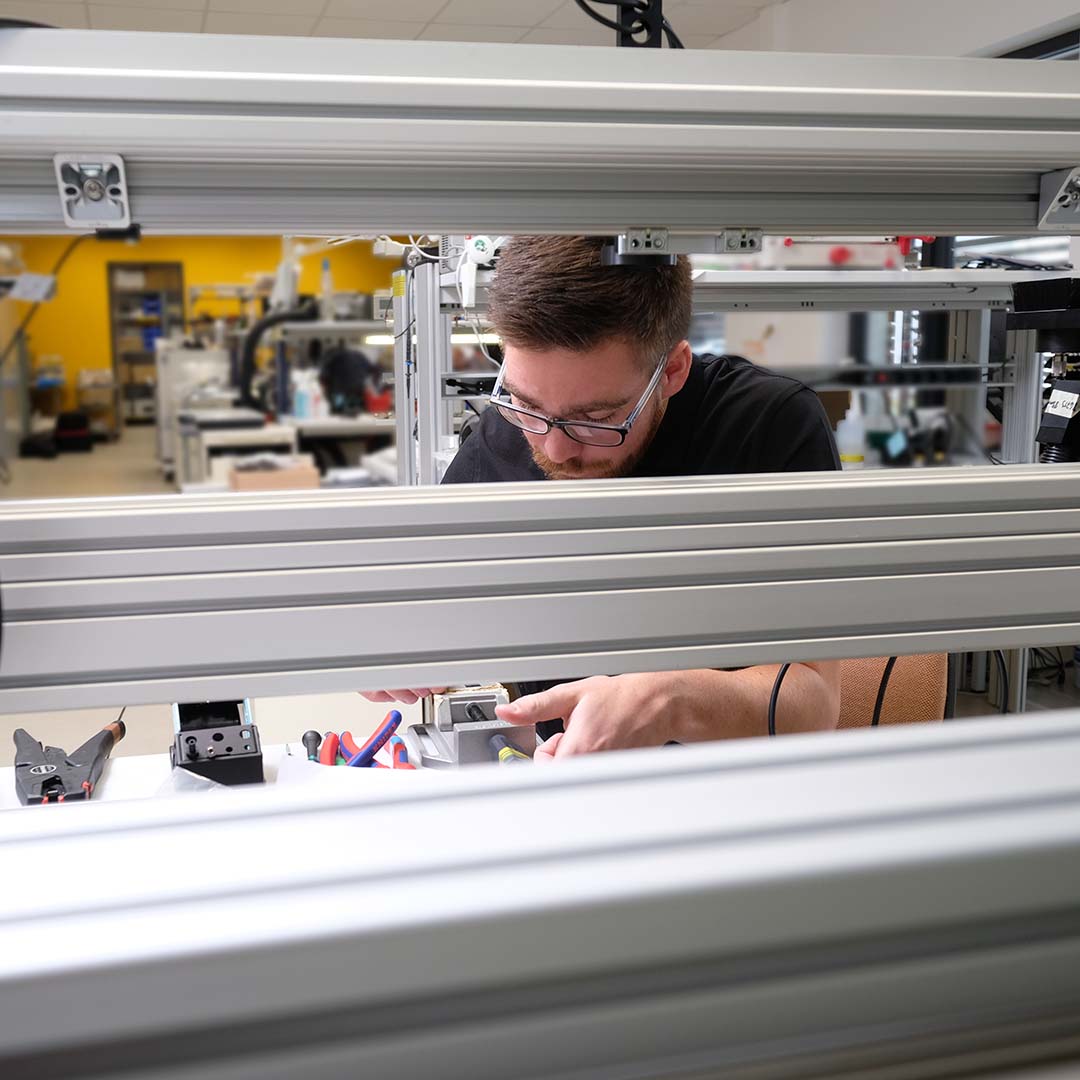 Our inline colour measurement systems are custom made for your production line. 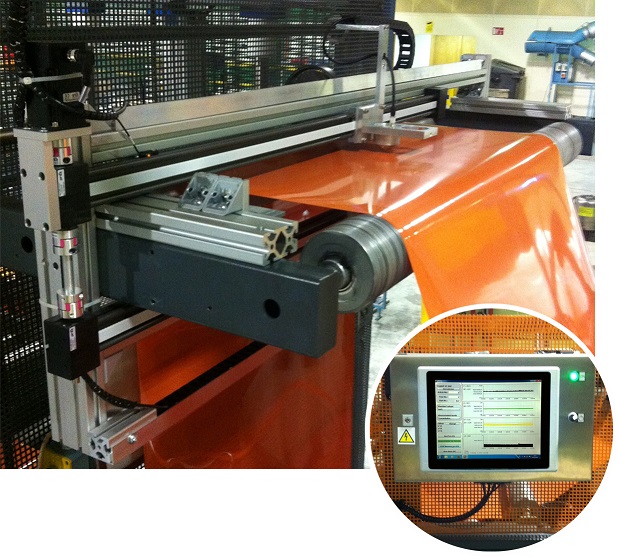 Colour is an important quality attribute of almost all products in production. The ColorLite sph9i is complemented by various probe heads variants and a wide range of accessories. Therefore the ColorLite sph9i system ensures colour measurement in different areas such as plastics, paper, textile and food industries. Permanent quality control minimizes waste in the production plant, effect increasing productivity by reducing time and costs.

Spectral colour measurement is the most accurate measurement method to achieve consistent and best-reproducible measurement results. The samples are illuminated with homogeneous, white light of high power LEDs. The surface of the product is scanned spectrally in 3.5 nm steps. The wavelength coordinates of 400 to 700 nm are shown in the desired colour scale. The ColorLite sph9i takes into account the appropriate type of light and the observer angle of the selected probe head variant. 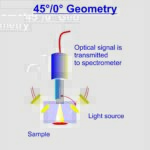 The 45°/0° measuring geometry is standardised in DIN standard 5033. The sample is illuminated at an angle of 45° with a direct light source and the reflected light is measured at 0°. The measurements of this measurement geometry come closest to the vis… 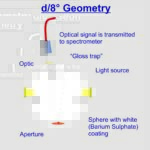 The standardized d/8° measuring geometry is described in the DIN 5033. The probe is illuminated with a diffuse light source and measured at an angle of 8°. The diffuse light is generated in a so called integrating sphere. The gloss of the surface is me… 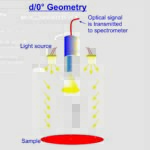 The d/0° measuring heads ( and -adapters) MA38 and MA80 illuminate the sample with a diffuse LED light source on an area of 38 mm or an 80 mm respectively. These versions are used to measure inhomogeneous samples such as granules, food, wood paints or… 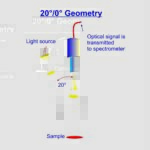 20°/0° probe head – for measuring with distance

Probe head for basic system sph9i The 20°/0° measurement geometry makes it possible to reach an independent height for measuring colours with an gap up to 80mm. The probe is being directly illuminated in an 20° angle and the than diffused reflected lig…

A list of commands in an ActiveX DLL library enables you to communicate with the spectrophotometer from your software. 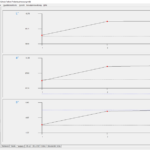 The ColorDaTra-database program is a very easy to use tool to review analyse protocol your colours   Basic function: Archiving of reference colours as standard Visualization of production models as CIE L * a * b * absolute and relative values and… 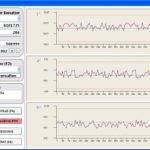 With the convenient quality assurance software, you can keep the readings simple represent and manage. Important functions:  Trend display with time-dependent deviations of the different colour values Standard colour management with limits for dE * ab… 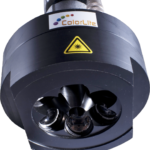 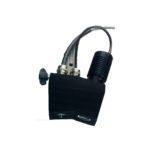 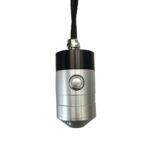 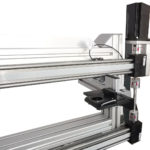 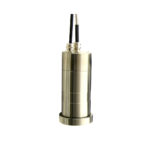 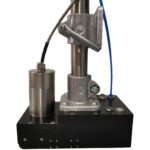 Enables an automatic calibration during the production. Controlled through the basic system sph9i Calibration of the spectrophotometer with a resistant white ceramic standard at preset or conditional dependent intervals. The precision guided and sensor… 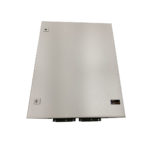 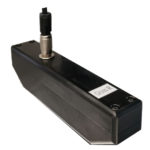 60° degree gloss measurement according to DIN EN ISO 2813 (old DIN 67530) Controled directly from the sph9i Including integration into the software ColorDaTra ipm. 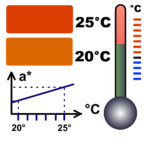 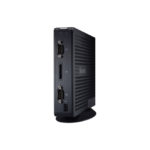 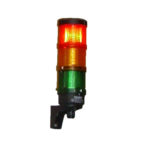 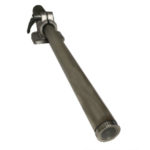 The increasing demand for inline measuring technology is caused by the growth of automation and networking in the production. ColorLite offers customer-specific solutions with intelligent networking to their process control system. The sph9i online spectrophotometer is available with various probe heads, modern industrial interfaces and extensive accessories. Due to the high degree of precision, it is possible to react quickly to deviations during ongoing production process. It is used in different industry areas such as the plastics, paper, textile and foods. 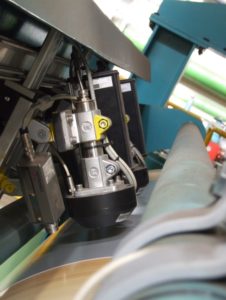 With the  online spectrophotometer sph9i the colour values are continuously measured and controlle              during the running coil coating process. The system is equipped with an infrared sensor for measuring the      material temperature and subsequent thermo-chromatic compensation. Furthermore, the system has a          fully automatic calibration unit. The operator terminal is supplemented by an industrial PC and a touch            screen monitor.

Colour and optical density measurement in the plastic sheet production 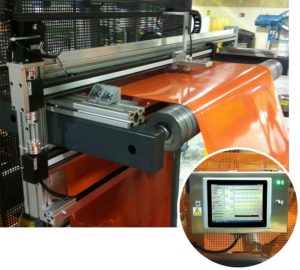 The ColorLite system is characterised by the highest quality and easy using.  Measured values are visualised on the integrated display and can be stored for later reference with optional SQL database software. The system can measure inline up 5 density units (D5). The completion of a colour change is no longer a guessing game. The device automatically controls the dosing unit  where the colour starts to deviate from the standard, thus avoiding an the production of out of range goods. There is no waste and thus no expenses. 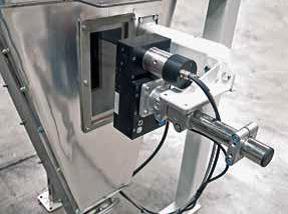 The measuring system consists of a touch screen PC built into a control cabinet, as well as the
proven sph9i spectrophotometer, the measuring head MA38-VA with a d/0° geometry or our MA80
which measures over a diameter of 80mm. The MA38-VA can be provided with an automatic
calibration unit.

We offer direct sales or support from our local distributors.

Sign up for the newsletter and do not miss anything!

We are looking for you to support our team.